Those of you who are in Castle Park most of the year have seen what a massive job it is to care for the on site needs during the spring and fall months.  For years we have scrambled to hire laborers to assist Mark with all of the tasks required during the shoulder season. Most of the time we have used temp agencies and sometimes even resorted to begging friends for help. Along with that, year after year we had to repeat the process of hiring and training two college students for the summer, since they so rarely are in a position to return.

After a number of meetings with the Personnel Committee as well as the fall meeting of the Board of Trustees, the decision was made to add a more permanent position to the Castle Park staff.  This position was to replace nearly all of the temp agency needs, one of the student summer workers, as well as the current cleaning help. We were looking for someone strong and with a quality work ethic that would be willing to work semi part time and just 8 months of the year…not an easy opening to fill.  We had worked with Kenny Watters in the past as he assisted us with various needs around the Park, so we were delighted when he agreed to take this new position and begin working alongside Mark the first of April.

Kenny and his wife Nina will be joining us at the July 6th BBQ. Please be sure and stop by the table to meet them and welcome Kenny aboard.

Below is a photograph and a little bio that he has provided us with. 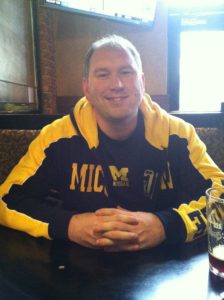 Kenny Watters was born in Roscommon Michigan. He has lived in Arizona, Illinois and moved back to his home state 5 years ago. He met his wife in Illinois and they have been married since 2008. In his free time he enjoys being outdoors, spending time with friends, and playing sports.

He has worked in maintenance, professional cleaning and construction. He has been handling the cleaning of the castle and common buildings for the past few years. Kenny says he is very excited to be working with Castle Park on a permanent basis and looks forward to meeting everyone!